I caught a faint reflection

of what I thought was me –

I leaned too close and fell right in

The river fast and deep.

The waves’ roar, fierce and hungry,

Tossed me end to end to tip

And throttled with wet jaws.

My orientation left me

In search of space less cold

As wild I struck with hands and feet

To gain a spot to hold.

I thought that I was done –

When whispered in dishevelled ear

‘Stand up?’ I cried, and swallowed gulps

Of water wild with spray.

And tossing hard upon the waves,

I felt my heart give way.

“Stand up!” the stern rebuke rejoined.

For balance, I sought new;

The water, rushing on its way

Was only to my waist;

Although its fury gnashed and writhed

Walk through, I could; with effort true

I made it to the sod,

And choking long, and gasping hard,

I gave my thanks to God. 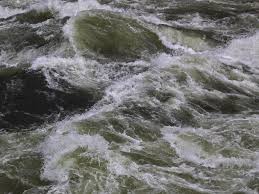 “Fear not, for I have redeemed you; I have called you by name; you are mine.  When you pass through the waters, I will be with you; and when you walk through the rivers, they will not sweep over you…” Isaiah 43:1,2 NIV

8 comments on “Fighting the Undertow”

What are your thoughts? Cancel reply

What have I written about?

All poems and photos are expressly owned by the author, Melody Lowes, Copyright 2012-19. Permission is required to reprint any portion of my work. Images not owned by me are marked with credit information. All rights reserved.